Textiles of the 20th Century

Naked is nice, but upholstery is better. 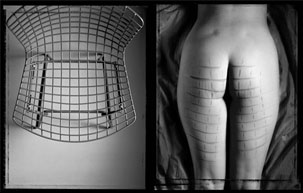 The chairs were true classics of the modernist era, both originally produced in 1952; one developed in the studio of Charles and Ray Eames for Herman Miller of Zeeland Michigan, and the other, a product for Knoll Associates by a sculptor with an affinity for wire and welding, the young Harry Bertoia.

A little online research revealed that the original chairs had come clad in upholstery designs by architects-turned-furniture-designers Alexander Girard, George Nelson, and Charles and Ray Eames. Inquiries with Herman Miller and Knoll revealed that the chairs were still in production but quality upholstery for the chairs was expensive and difficult to source with a minimum lead time of 12-14 weeks.

Impatient, on a budget, and faced with a lifetime of uncomfortable sitting, I decided to reverse-engineer the seat cushions using authentic reproductions of the original 1950’s upholstery — namely, vintage textile designs from Maharam’s ‘Textiles of the 20th Century’ collection. Once the chairs were properly clothed and I was satisfied with the high-quality of the results, I decided that maybe other modern furniture collectors have a similar need — a resource for made-to-order upholstery that is true to the original design of the chairs, but more affordable and more readily available for purchase exclusively through an online web shop. In 2003, I launched eamesbikini.com and about a year later, it’s sister site, BertoiaPads.com.

Now over 18 years later, I still run the online shop with an obsessive attention to detail, providing custom upholstery options by Maharam, Knoll, Spinneybeck Leather, and even eco (and PETA) friendly options such as Willowtex’s premium leather alternative ‘Izit Leather’.

In 2014, we celebrated our ten year anniversary with this new website and an expanded selection of upholstery options. I hope you find something you love here — made in America, by hand, since 2004.